Why the Twitter Hack is Good Publicity for Bitcoin

The Bitcoin technology used during the hack holds a two-fold solution to the problem itself...

In today’s tech-giant world, we’ve been conditioned to believe that our data is the price we pay to exist on social media and that the potential for data leaks or hacks remains an unsolvable bug.

Not so! On the surface, the story about Twitter’s recent hack seems to paint Bitcoin and social media in dark colours. But, when you dig a bit deeper, you’ll see that the preventative measure and cure is right in front of our eyes - locked up in the Original Bitcoin technology.

Between 15 and 16 July, 31 high-profile Twitter accounts were accessed by dark actors. Impersonating the account owners, they tweeted the promise of doubling any Bitcoin (BTC) sent to them via a specific address.

Here is a compilation of all high-profile Twitter account hacks that happened yesterday in chronological order. It all started at 2:16 PM ET with a known crypto account @AngeloBTC asking for payment to join a fake telegram paid group. pic.twitter.com/h1mVweoSTv

Twitter was quick to respond, locking the breached and high-risk accounts, and promising to implement additional security measures. Contrary to initial assumptions, Twitter’s investigation revealed that access was gained NOT through a high-tech hacking method, but rather a social engineering manoeuvre that convinced Twitter employees to grant them access. 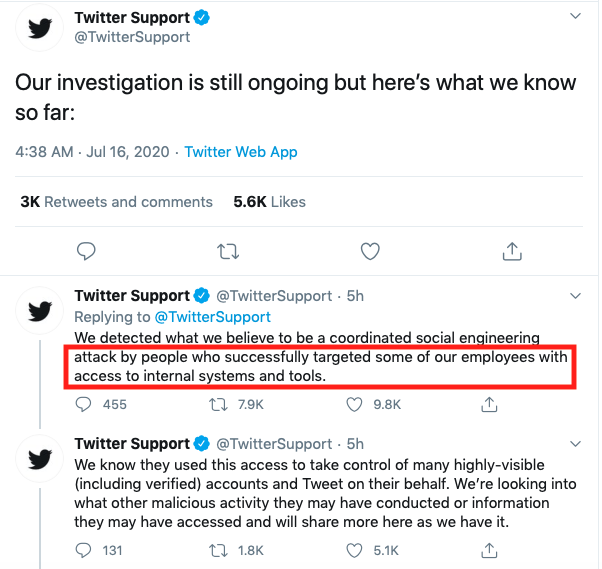 The Underlying Issues and the Solution

Despite Twitter’s best efforts to secure their systems, the response is much like trying to minimise the symptoms of an underlying condition, instead of applying the tried-and-tested cure.

In this case, the underlying issue is the very nature of the centralised data model: sensitive data is stored in a so-called ‘honeypot’ where a single breach lets all the honey come spilling out.

The beautiful irony of this situation is that the Bitcoin technology used during that hack holds a two-fold solution to the problem: the elimination of a central point of control, and traceable digital money.

Shortly after the hacks became known, compliance and investigation software provider Chainalysis started monitoring the flow of money to the hackers’ bitcoin (BTC) addresses. As Bitcoin is built around a public ledger system, transactions can be monitored in real-time. All it would take to freeze and seize the funds is a court order issued to Bitcoin miners and/or the exchanges where funds are held.

The Elimination of a Central Point of Control

The second part of Bitcoin’s solution to the problem lies in the way it eliminates the ‘honeypot’ entirely. For, as long as an entire data system can be compromised through a single weak link - whether it’s a crooked CEO, an exhausted IT professional, or a black hat hacker - all of the data in the system is vulnerable.

The best way to understand Bitcoin’s solution is by looking at Bitcoin-based social media platforms like Twetch.

The main difference with Bitcoin-based social networks is that, whilst they back up everything to the blockchain by default, they hold no sensitive data such as passwords or private keys - users simply make micro-payments in Bitcoin SV to interact on the platform. This means that users own their passwords, their profile, their posted content and their followings; empowering them to profit from what they create and how many people follow them for it, eliminating the need for advertising.

Though adoption of Bitcoin-based social media platforms is still at a trickle, the tide is turning in its favour. Twetch co-founder, Josh Petty, reports “a nice bump in new users during hack - looks about 2 new users per minute during the first hour of Twitter hack.”

Bitcoin is Perfect for Keeping Bad Actors Out and Accountable

To sum it all up, Bitstocks CEO-Founder, Michael Hudson had the following to say:

The recent Twitter hack illustrates that when you’re handling user data that has the power to trigger a war, it probably isn't a good idea to have it all centrally located to run your own private system and to not leverage on public security and in this case public security would be the Bitcoin blockchain. The advantage of a social media network that’s built on top of Bitcoin is being perfectly demonstrated today with Twetch.