After years of watching Bitcoin Fake News being sold for The Real Deal, Satoshi Nakamoto himself started taking steps to get the Bitcoin Project back on track.

This blog is the ninth extract from our eBook, “A Short History of Bitcoin Myths”. You can download your copy here or read other extracts over here:

Part 2: The Genesis of Bitcoin

Part 6: Myth IV - Ethereum is a New and Improved Bitcoin

Part 8: Myth VI - The Lightning Network Will Bail Bitcoin Out

The Rebirth of Bitcoin

Over the course of this Bitcoin Myths series, we’ve discussed the design, philosophy and vision of the Original Bitcoin and covered six common delusions that have distorted the public’s perception of Bitcoin.

Within the Bitcoin world, many have been swayed by false narratives promoting Bitcoin as a means to anarchy and as an anonymous tool for criminal operators. Far too many came to believe that Bitcoin is broken and unable to scale on-chain. But, this was a lie introduced to pave the way for the introduction of second-layer solutions that would make Bitcoin more criminal-friendly. A number profiteers have twisted Bitcoin into a speculative asset with scam artists following close behind to launch their own fraudulent fundraising projects. 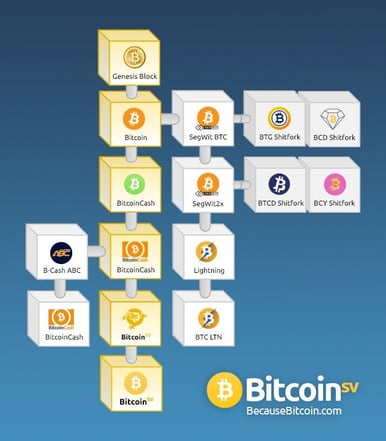 Image by BecauseBitcoin.com, used with permission

Had the Bitcoin Project remained captured by scam artists and criminal organisations, no doubt it would’ve ended broke, as a permanent outlaw, or behind bars.

After years of watching Bitcoin Fake News being sold for The Real Deal, Satoshi Nakamoto himself started taking steps to get the Bitcoin Project back on track:

“I saw what I created as it started to become the thing I despised.

The ‘crypto’ community is not seeking Satoshi; they want a constructed myth that allows them to believe they can have an anonymous system of money and those things parliaments seek to stop, they can allow. They would not want me, as the system I created is not anonymous and it cannot be made to be anonymous. The nature of a ‘blockchain’ is a system that acts as an immutable and admissible evidence stop that binds both the individual and the system they exist within.”

Dr Wright set off on a number of corrective measures to liberate the captured Bitcoin. First, he supported the creation of Bitcoin Cash and then initiated the creation of the Bitcoin SV (Satoshi Vision) project to restore the original protocol and develop it to its full potential.

Although much controversy surrounds Dr Wright’s claim of being Satoshi Nakamoto; we do not doubt it. If you’re not yet convinced, read why we and some of the first adopters and developers have come to this conclusion:

Dr Wright’s association with Bitcoin SV has put the project on many people’s radar and others’ hit list. And yet, when assessing the Bitcoin SV project’s value and viability, the BSV protocol and gameplan should be prime factors for consideration.

To get to an assessment of BSV, let’s backtrack to our earlier discussion of Bitcoin’s economic model and design.

The Bitcoin blockchain relies on miners to contribute their computing power to secure the network and commit valid transactions to the ledger. In exchange for their service, miners compete to earn a block reward that is paid out with the successful mining of each new block. This reward consists of the combined transaction fees plus a block reward subsidy (a fixed amount of Bitcoin). Over the years, the fixed block reward is halved at intervals of 210,000 blocks (approximately every four years) in correlation with Bitcoin’s deflationary model.

Although the Bitcoin price has seen a significant increase over the years, so has the cost of mining it. For Bitcoin to retain the services of the miners that are pivotal to its survival, the block reward must remain big enough to be lucrative to miners.

The day when the block reward no longer allows for profitable mining is the day that miners pack up their gear and invest it in another use case.

To prevent this doomsday scenario, Bitcoin was designed with the intent of extensive on-chain scaling so it could host thousands of business applications. Each new use case would increase the transaction volume and likewise boost the block reward while keeping individual transactions cheap enough to allow micropayments.

The ‘cryptocurrency industry’ has turned Bitcoin’s core architecture on its head to create a situation where a thousand blockchains are competing for a limited volume of transactions. In the case of BTC, transaction fees skyrocket and processing speed comes crawling to a halt whenever demand peaks. The situation is far from sustainable - for users, developers, and miners.

“Yes, there can only be one blockchain. This is the whole nature of it: if you have various competing systems, they are all competing for a limited volume of transactions. The (globally available) volume is insufficient to sustain them all which means that either only one will survive, or they will all collapse. There is no middle ground here, it is the nature of the protocol. It is either one, or nothing.” Dr Craig Wright

Bitcoin’s only chance for survival is if the entire crypto community unites behind one public blockchain. This single blockchain must be capable of hosting thousands of business applications on-chain without the friction of time delays or high fees.

With a proven track record of on-chain scaling and a roadmap with a primary focus on attracting businesses and developers, Bitcoin SV is best positioned to serve as the global public data ledger for all business applications.

The Roadmap to Genesis, Part II

Once Quasar goes live, the default block size hard cap will be raised to 2 GB for all network participants. Miners will be able to choose their own limit based upon economic incentives and market forces, likely a 512 MB hard cap. In the 2020 Genesis upgrade, block size limitations will be scrapped entirely to liberate BSV from arbitrary limits and align it with the principles of economic viability and sustainability.

To conclude our series on Bitcoin Myths, we hand over to Jimmy Nguyen, President of the Bitcoin Association:

“BSV is the only coin with a blockchain that significantly scales (now), has robust utility (now), and is committed to a set-in-stone protocol for developers to build on (once the return to the Original Bitcoin protocol has been completed in February 2020). BSV is also the only coin that adheres to the original Bitcoin white paper. In short, BSV is Bitcoin.”