The Bitcoin Timeline in 9 Milestone Moments

On 15 November, we celebrate Bitcoin SV’s birthday - or as some of us like to refer to it, Bitcoin Independence Day. If you follow our timeline below until the end, you’ll see why!

This year, the day marks the second anniversary of Bitcoin’s return to Satoshi Nakamoto’s vision of Bitcoin, and the rebirth of the original Bitcoin project under the Bitcoin SV brand name.

Confused? Here’s a summary of some of the important events and unexpected developments that have resulted in twists and turns in the Bitcoin project’s history.

Although this summary will give you a pretty good overview of the events that have led us to the conclusion that BSV is the original Bitcoin, we encourage you to follow the reference links and DYOR.

Significant Events That Have Shaped The Bitcoin Movement

31 August 2008: Satoshi Nakamoto published a research paper entitled, “Bitcoin: A Peer-to-Peer Electronic Cash System” to a cryptography mailing list. The document outlines the intended functionality and purpose of Bitcoin. Nakamoto’s paper proposed a viable solution to some of the most prominent issues that had hindered cryptocurrency development until then: double-spending, and government oversight.

The innovative solution was also rather simple: the blockchain operators would publish transactions and data interactions to a public ledger, instead of a private one.

"Bitcoin's ONLY innovation is that it is PUBLIC." Dr Craig Wright

Read more: The Backstory of Bitcoin

22 May 2010: Laszlo Hanyecz, a Florida-based programmer, paid 10,000BTC for home delivery of 2 large pizzas. This is the first retail transaction recorded on the blockchain. The exchange rate at the time put the price for the pizzas at $25.

Some people try to trivialise this event. These folks commonly proclaim that Satoshi Nakamoto created Bitcoin to function as ‘digital gold’, and that large transactions (as well as transaction fees) are the way forward.

We disagree strongly! For a start, the title of the Bitcoin Whitepaper can’t be ignored: “Bitcoin: A Peer-to-Peer Electronic Cash System.”

But more than that, reducing Bitcoin to a system that only transmits a few transactions at huge cost nips its potential as global data-infrastructure in the bud!

No, thank you! We’ll take the original Bitcoin any day!

Learn more: What if Bitcoin is NOT What You’ve Been Told?

3. Darknet Use of Bitcoin Exposed and Confronted

2 October 2013 - 29 November 2013: Operation Onymous, an international law enforcement operation formed as a joint venture between the FBI and Europol, with the added support of the US Department of Homeland Security, Immigration and Customs Enforcement (ICE), and Eurojust hunts down dark markets operating on Bitcoin.

Firstly, the FBI shut down The Silk Road, a now-notorious online marketplace on the dark web for dealing in drugs and other contraband products and services, with bitcoin as accepted as payment method. The Silk Road’s founder, Ross Ulbricht, with an online alias of Dread Pirate Roberts, was arrested and faced numerous criminal charges. The FBI seized 30,000 BTC from The Silk Road's bitcoin holdings and an additional 144,000 BTC from Ulbricht’s private holdings three weeks later. The court subsequently sentenced Ulbricht to life imprisonment without parole.

You might be surprised by our reason for including this event: it squarely busts the myth that Bitcoin is anonymous and untraceable. In fact, Bitcoin’s traceability proved so helpful to the operation that it even revealed FBI fraudsters in the process!

31 October 2015: The popular liberal economic publication, The Economist, featured Bitcoin as The Trust Machine. The accompanying article detailed Bitcoin and the utility of blockchain technology, with a particular focus on its potential role in banks and government institutions.

The Bitcoin community at large was not all that concerned with mainstream adoption at this point. And yet, the coverage highlighted an element the media often neglects: The beauty of running applications on Bitcoin's distributed ledger, instead of a centralised one, is the elimination of a central point of failure.

Read more: Bitcoin is Not a Cryptocurrency - It’s MUCH Better

1 August 2017: Following a heated, long-standing debate around the pressing need for a viable solution to Bitcoin’s so-called scalability issues, a group of Bitcoin developers, in favour of a hard fork from the main blockchain, created a Bitcoin derivative called Bitcoin Cash.

A primary differentiator is that Bitcoin Cash disagreed with the use of Segregated Witness (SegWit) as a scalability solution. The Bitcoin Core group insisted on implementing SegWit on the Bitcoin (BTC) network, where Bitcoin Cash implemented a different scaling solution: an immediate increase in the block size, which would allow the network to process more transactions at once.

Despite initial fears and hype, the hard fork went ahead smoothly with little to no disruption to the Bitcoin network. Those who held bitcoin (BTC) at the time of the chain split were awarded an equal number of Bitcoin Cash (BCH). A large number of Bitcoin developers and early adopters declared their conviction that Bitcoin (BTC) had strayed from Satoshi Nakamoto’s vision and they now considered Bitcoin Cash (BCH) the original Bitcoin.

The SegWit upgrade of the BTC network concluded one aspect of an agreement reached in May 2017, dubbed the New York Agreement. As part of the second aspect of the agreement, key Bitcoin businesses and miners committed to SegWit 2x, which would mean an increase in block size (from 1MB to 2MB, therefore the name 2x). The update was cancelled at the last minute, and the Bitcoin (BTC) block size remained small, the network congested, and transaction fees high. At the time of publishing, the BTC block size remains limited to 1MB, with a pending proposal to reduce it to 300KB.

Not clear on what all the block size fuss is about? Read our blog on the topic to get an understanding of the significance of the big blocks made available on the Bitcoin network.

I wish I could report that “Bitcoin Cash was born and we all Bitcoined happily-ever-after.”

As it turned out, it didn’t take long for factions to arise within the Bitcoin Cash community.

In July 2018, Bitcoin Cash developer Amaury Séchet published a proposal to include a software alteration to an upgrade planned for 15 November 2018.  Séchet's post outlined a new transaction ordering protocol and other changes they would include in the upgrade, and tensions started to rise.

Craig S. Wright expressed strong disagreement with the proposed update and released his own proposal in a paper called Satoshi Vision. The protocol, as its name suggests, involves using the original specifications outlined by Nakamoto in his Bitcoin whitepaper. The only difference to these specifications would be a much larger block size, as Satoshi Nakamoto had hinted would be necessary as the market grows. Published by nChain, the Satoshi Vision proposal suggested a 128MB block size for the network.

Some predicted that 15 November (2018) would be the first implementation of the Nakamoto consensus mechanism, as described in the Bitcoin Whitepaper. In order to decide on the way forward, miners embarked on a hashing war. The parties had agreed that the chain with the most support would be crowned the victor while the other chain would cease to exist and their supporters would rejoin the victorious chain. (Read our blog on the Nakamoto Consensus Mechanism)

What we saw instead was an unannounced addition to the Bitcoin ABC upgrade with the developers including a checkpoint to the latest release. This upgrade was slyly distributed several hours after the start of the fork. The effect of this checkpoint was that adversarial miners were unable to override (“re-org”) the entire Bitcoin Cash ABC chain — which should have been the deciding factor between factions.

Bitcoin ABC broke the agreement in a second way - they hired additional hash power to get ahead. For days before the hard fork, Bitcoin SV had support from over 75% of the network hash. But, knowing they didn’t have enough support to win, Bitcoin ABC’s backers lured BTC hash power onto BCH to rig the election.

In a statement to the Bitcoin Cash community, Bitcoin SV proponent, Jimmy Nguyen warned about “Truth and Consequences” of the willingness to accept a burst of rented hash to force the outcome of the hash war in a direction.

7. The Future Internet, Metanet is Unveiled 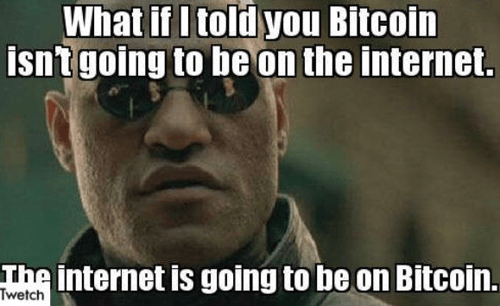 November 2018  - The BIG reveals about Bitcoin’s long game began soon after the birth of Bitcoin SV. During CoinGeek London, nChain’s Chief Scientist, Craig Wright (or as we call him, Satoshi) revealed a game-changing project: a Bitcoin-based Internet, built with the Metanet protocol.

Over time it became clear that Satoshi had created Bitcoin with the long-term goal of enabling the creation of an economically incentivised Internet. For many of us, the concept gradually revealed why Craig Wright had been so insistent on retaining Bitcoin’s 4 technological pillars: Protocol stability, scaling, security, and secure instant transactions.

With these elements in place, Bitcoin is set to become the infrastructure for an Internet where users can own, protect, and monetise their own data, while companies can create unique online business models, all protected by the ultimate firewall.

Read more: The Internet is Broken - and Bitcoin can Fix it

January 2020 - Although Bitcoin SV had sidestepped Bitcoin Core’s implementation of SegWit, and split from Bitcoin Cash before they made further protocol changes, there were still a few obstacles preventing it from fulfilling Bitcoin’s full potential.

For one, the transaction data size limit was still artificially set, and therefore limiting organic network growth. For another, the network could still only propagate standard transaction types - limiting its ability to process data interactions.

The Genesis upgrade fixed both of these issues: by removing the data limits entirely (leaving it up to miners to change the ceiling as needed) and by allowing the propagation of all transaction types, including any data-based interaction programmers can come up with.

The Genesis upgrade unlocked Bitcoin’s full potential, but it also served as part of Bitcoin SV’s promise of locking down the protocol. Given a stable protocol, corporations can now build on Bitcoin SV without fear that developer politics down the road could render their projects unusable.

“If you think about the Genesis upgrade, it's about unleashing what Bitcoin should be and how it can start growing.”

Read more: Bitcoin SV - What to Expect from the Genesis Upgrade

2020 and beyond - Now that the protocol wars are over (or as Steve Shadders, the lead BSV developer, put it, “Bitcoin is unfucked”), the field is open to exploring Bitcoin’s value proposition for enterprises: a global data infrastructure that’s secure as can be, and using it’s as cheap as chips.

At CoinGeek London in February, we got to know two pioneers in Bitcoin SV’s enterprise adoption:

During September’s CoinGeek Live, the following enterprises were added to the list of BSV pioneers:

Although we’re still in early days of enterprise adoption, one thing is sure: Bitcoin SV is building the infrastructure for the data-based economy - or, the Fourth Industrial Revolution.

All that has to happen now is for us to introduce and onboard enterprises.

What is Bitcoin and Where is it Going?

And with that folks, it’s a wrap! Be assured that we’ll keep updating this blog article as new developments occur.

As a final note, we’d like to remind you that Bitstocks supports Bitcoin SV as the true version of Bitcoin, as outlined in the 2008 Satoshi Nakamoto Whitepaper. If you’d like to know more about our understanding of Bitcoin’s history and how it fits in with the next industrial revolution, we invite you to download your free copy of our ‘What is Bitcoin? 11th Birthday Edition’ eBook.