NFT sales raking in billions as artworks, collectibles, and even virtual land sell for record-breaking prices

NFTs, the acronym for non-fungible tokens, have exploded in popularity since making mainstream headlines in late 2020. And judging by the sales values achieved in 2021 so far, they aren’t set to slow down any time soon.

Not familiar with NFTs? Read our post, What is an NFT? And 5 Other Questions about NFTs - Answered!

According to data released by DappRadar, which tracks sales across multiple blockchains, proceeds from NFT sales hit slightly shy of the $2.5 billion mark by the end of the second quarter of 2021, comprising $1.23 billion in Q1 and $1.24 billion in Q2. This is a vast increase on the $13.73 million achieved in the first half of 2020 and even the $81.13 million sold in the second half. 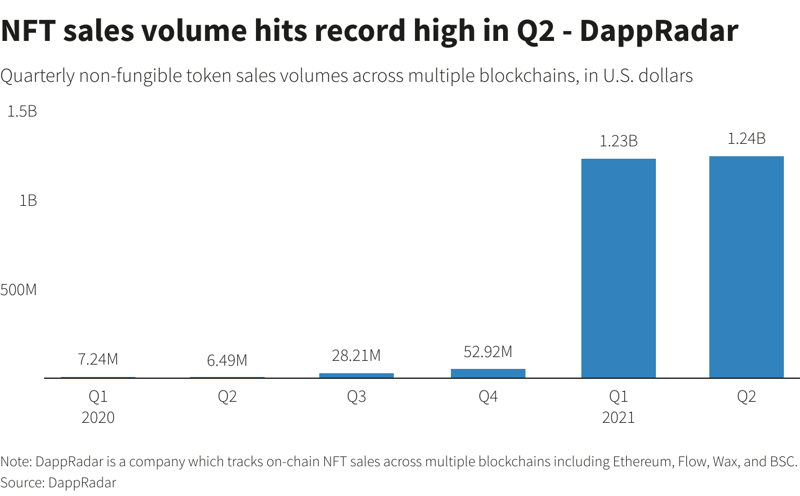 So, where’s all this money come from, you may ask? Which NFTs are bringing in the big bucks?

While falling just outside of the top 10, a landmark NFT sale (if you’ll forgive the pun) was for a virtual piece of land called “Genesis” estate in the blockchain-based game Axie Infinity. This digital land comprising eight adjoining ether blocks was bought by the gamer only known as “Flying Falcon” for $1.5 million in February 2021. At the time, this sale topped the records as the highest valued NFT before a flurry of record-breaking NFT sale values pushed it down the list.

The list above was curated and checked to be accurate as of 9 July 2021 based on publicly available information. Any errors or omissions are not intentional.

It’s exciting to see the appetite for NFTs growing, with significant value being placed in the market. NFTs offer people an opportunity to own something unique in the digital space. And while collectibles, art, and videos make headlines more often than others, there’s a vast range of assets we anticipate harnessing this technology in due course. A move we intend to be a part of too!