The Critical Difference Between Money & Currency

How do you define money? Is it the collection of hard cash you hold in your wallet? Perhaps you consider the credit available to you as well? Is it a mechanism that simply allows you to purchase the goods and services you desire? Or do you hold a deeper view?

I invite you to join me as I outline the evolution of money and currency, and explore why understanding their difference is crucial to not only your financial status of today, but more pertinently, your wealth of tomorrow.

The story goes that, way back when, bartering goods was a means to obtain items you needed, using products you had at your disposal. If I wanted potatoes and I farmed sheep, I could exchange a sheep for some spuds, provided I found someone who had said potatoes and wanted a sheep, that is.

The next hurdle would be the perceived value of my sheep against that of a bag of potatoes. In my opinion, an entire sheep is worth a whole lot more than a bag of potatoes, so how would I settle this dilemma? Perhaps I can offer a leg for the potatoes. But now I have the conundrum of being left with a whole lot of meat, and not a live, breeding sheep.

The trade would become even more complex if my farmer friend wanted my sheep (leg), but only had tomatoes. I would then have to find someone else who had potatoes and wanted the tomatoes I now had.

These flaws, the lack of transferability and divisibility, led to the creation of commodity money that could act as a transferable and divisible means for settling trade agreements. The value of the item was set and settled by using another commodity.

The Egyptians are recorded as the first civilisation to use gold as commodity money, as far back as 5,000 years ago, however it took them a while to move from raw gold nuggets to easily discernable coins. This was a significant innovation at the time. Would-be traders now had an easily portable, durable, divisible store of value to be as a means of exchange, which was fungible insofar as 1 gold coin was worth the same as the next gold coin.

For eons, this system worked.

As nations grew, they adopted commodity backed money, whether that was in gold or silver. They slowly replaced the actual metal coins with paper money that represented a claim for the equal value of the commodity, which was stored in the safes of the central banks. This was a currency people could safely use, secure in the knowledge it was backed by actual stored value, and held purchasing power.

In order to be able to spend more money than available - you know, for the likes of World War 1 and other important power struggles - governments adopted a new stance. They decided that money no longer needed to be backed by a commodity such as a precious metal, they could simply bestow a value on it. People would accept this paper money because the government has promised it is worth a certain amount.

And so, fiat currency was born.

As governments were free to print new money at whim, expanding the total supply, the new money needed to acquire its value from somewhere. Can you guess where from? Yes, backed by nothing else, it simply siphoned its value from the existing money supply, resulting in an erosion of buying power, and ultimately, the most underhanded tax imaginable, more commonly known to us as inflation.

Because the total supply of fiat currency can be expanded by quantitative easing, bailouts or stimulative monetary policy (whichever term the government decides will sound most ‘acceptable’ for its irresponsible actions), it will be subject to inflation. Inflation simply means that all those Pounds you have worked hard to put away for your golden years will be worth a whole lot less by the time you reach retirement. And although this impact is more apparent over the long term, you only need consider your price of purchases last year compared to now, to have a sense of upward creeping inflation. If you compare the amount your parents spent on groceries in 1973 to your own food bill in 2017, the difference becomes staggering.

At the end of the day, there is no government backed currency that is immune. Studies have shown that every fiat currency eventually becomes worth nothing more than the paper it is printed on. The average lifespan of a fiat currency is a paltry 27 years, with an inevitable success rate of 0%. Yes - that is zero!

Perhaps you are thinking surely our British Pound, with its status of being the oldest fiat currency around today, cannot possibly face the same fate? Our Government must be doing something right to ensure it still holds value, not so? If we consider that at its inception the Pound was worth 12 ounces of silver, and today is 1/200th of that, it means that we are looking at a debasement of 99.5%. Put another way, our currency has preserved a mere 0.5% of its buying power in just over 3 centuries. 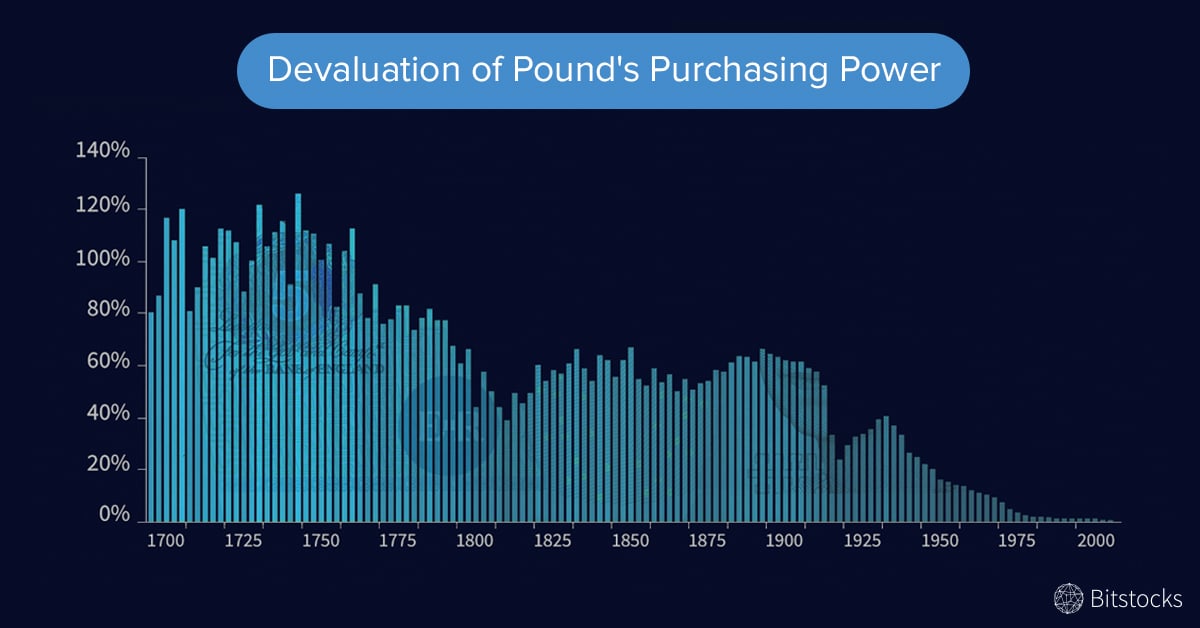 Still think your Pound based savings and investments are safe?

Unlike fiat currency, money is a store of value and holds buying power over a long period of time. If we consider gold - arguably one of the most successful forms of money to date - it is valuable because it is scarce. Once we have mined all the gold of the Earth, we cannot simply create more. It has a limited supply. This means that gold is not susceptible to inflation. Bear in mind, it is not gold’s innate value that changes over time, but rather its price. And the only reason the price increases is because of inflation of the fiat currency used to purchase gold, and other similar precious metals or commodities. 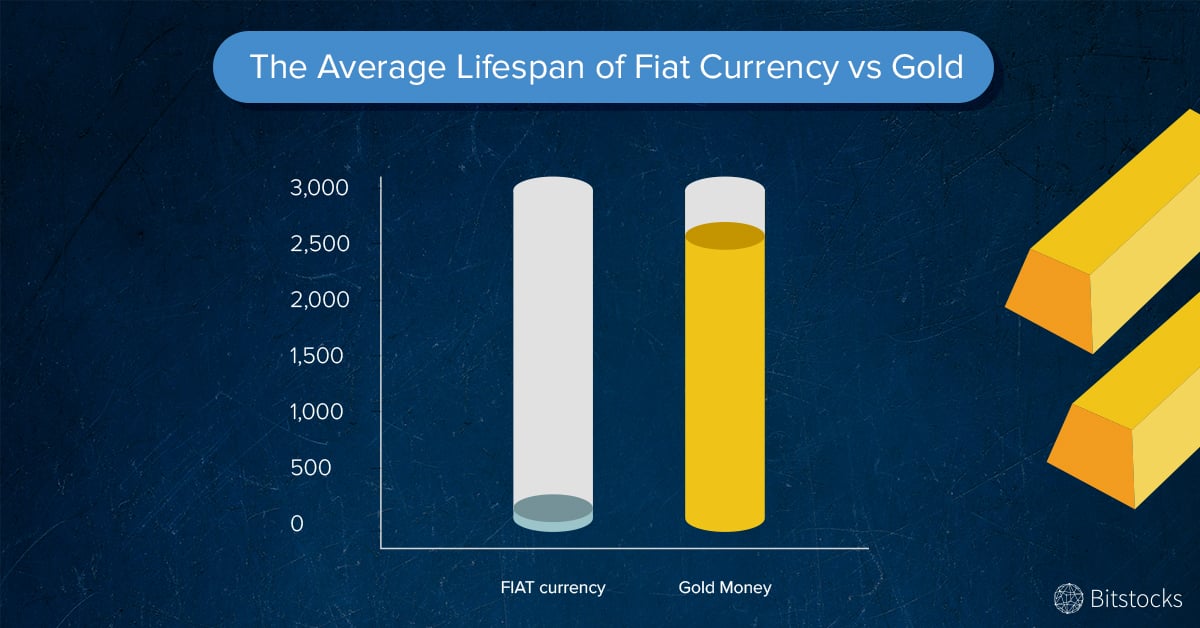 Technology has advanced to the point where it is an ubiquitous part of our everyday lives. Advances have empowered us beyond what we ever thought possible, and we, quite literally, have access to the all the information in the world from the palm of our hand, at any time we like.

And yet, the incumbent financial system still relies on the principles of yesteryear. Yes, currency may now be largely digitised on a number of fronts - we use electronic or mobile banking and the likes of credit cards to move our currency digitally - but the underlying tenets still lie in centralised control, exercised by governments. Dominion over our personal finances evades.

Until now, that is.

Bitcoin brings to finance what the Internet gave to information: accessibility. Bitcoin breaks down the barriers of the traditional system. You no longer require permission from any organisation to interact financially. You no longer need to fear the long arm of government being able to dip into your account, whether literally through forced capital controls, restrictions or flat out seizures, or figuratively by inflation.

Unlike fiat currency, bitcoins are not created from debt. They come into existence at a predetermined and predictable rate, through the efforts of the ‘miners’ (not physical miners, a wide web of computers) that verify transactions and permanently inscribe them onto the blockchain. There will only ever be 21 million bitcoin issued into circulation, however they enter circulation at a tapered rate, which halves roughly every 4 years. In other words Bitcoin currently has some level of ‘inflation’ in that not all coins have been released as yet, but their creation rate is deflationary, and therefore the basic laws of supply and demand come into play. This capped supply is a hard coded element of the original algorithm that cannot be changed, and akin to gold, means that Bitcoin will never be subject to hidden taxes of today’s economic systems.

Bitcoin is not governed by any one central authority, is it controlled by advanced technology, called cryptography, and its framework, the blockchain, is impenetrable and immutable. Bitcoin is, therefore,  durable in that cannot be destroyed. It may be enhanced by developers and applications built using the network as a base, much like a goldsmith would with gold to create a beautiful piece of jewellery adorned with diamonds, but the underlying properties will always remain the same. This is key to the intrinsic value of Bitcoin: its utility, and its role as the founding protocol of the Internet of money.

Bitcoin has extensive utility, both existing and to be fully realised. There are practically unlimited ways that Bitcoin can be used in everyday life, from general purchases to cost-effective and time-efficient international money transfer. But its full potential is yet to be seen. Bitcoin has the capacity to infiltrate just about any industry and bring about positive, disruptive changes in processes. Over time, we have outlined many viable applications for Bitcoin, including, but not limited to:

Bitcoin holds the qualities of money and adds another layer; programmability, as data can be incorporated into transactions, making it profoundly usable, and as a result, inherently valuable. It is the reinvention of money for the age of technology, the money of the future - and it is available right now!