We dive into the data, charts and facts to back up the claim that BSV is bigger and better than Bitcoin Core

When I was introduced to Bitcoin, way back in 2014, it was far less complicated than what’s become today. Bitcoin was Bitcoin - plain and simple.

But I feel for people getting into Bitcoin now.

Unless you’re willing to put in the time to study and research the tempestuous history of Bitcoin technology, my worry is that you may land up investing in something that’s ’sold’ to you as Bitcoin, but in actual fact, holds none of the original vision and design of its creator - Satoshi Nakamoto.

Today, I’d like to share some objective facts about Bitcoin Satoshi Vision (also known as BSV or BitcoinSV) and why we, as a business, support this implementation as the true Bitcoin, by comparing its technical abilities and characteristics to Bitcoin Core (also known as BTC and marketed as ’Bitcoin’).

If you’re still new to Bitcoin, here’s a brief recap of events that led up to the emergence of the three implementations. If you’re already up to speed, feel free to skip ahead.

BSV is Bigger than BTC

One of the core reasons (if you’ll excuse the pun) that BSV came into being was an ongoing fight between developers regarding the block size limit.

The block size is crucial for two aspects of Bitcoin. Speed. And data.

In terms of speed, the block size limit of 1MB on BTC leads to long delays - sometimes even days - of transactions being processed and confirmed on-chain. As a technology promised to be the ‘a peer-to-peer electronic cash system’, paying exorbitant fees to send payments that can take hours to conclude, BTC is failing miserably. BTC developers still insist that BTC is a digital store of value, like electronic gold, and therefore, they feel justified in their approach. /p>

On the other hand, with no block size limit in place, BSV can process in excess of 10,000 transactions per second, leaving even the VISA payment network’s capacity of 2,000 per second in the dust.

The block size limit also hampers growth of the network beyond purely a payment system.

BSV is data-friendly, meaning that any type of transaction can take place on the network, not only a monetary value. This opens the door to the next evolution of the Internet, an age where individuals reclaim sovereignty of their data.

If you’re hungry for more information on this specific topic, I recommend these reads:

Bitcoin’s True Potential: A Pipeline for the New Oil

In May 2021, Bitcoin Satoshi Vision officially surpassed the overall blockchain size of BTC, proving that scalability via larger block sizes is undeniably achievable, despite the cries from the Core camp that it wasn’t.

The chart from coin.dance shows the exponential growth of the BSV network, eclipsing BTC in May 2021. At the time of writing, (11 August 2021) BSV’s total blockchain measures 532GB, compared to BTC’s 364GB.

If we drill down further, we can examine the average block sizes being mined on each network per day.

In August 2021, so far, we’ve seen the average block size being mined on BTC at around 1MB compared to a highest daily average of a whopping 109MB on the BSV network.

Incidentally, the BSV network set a new world record this past week, mining a 1GB block!

BSV’s capacity to manage large block sizes with exponentially more transactions means that even if the processing time slowed down for any reason, the backlog of transactions (in the mempool) could easily be cleared with the next block confirmation.

BSV is Better than BTC

I appreciate that this could be considered a subjective statement, depending on your personal reasons for using or investing in Bitcoin, so I’ll stick to facts based on fees, speed, and utility.

Again, referring back to the original whitepaper vision of Bitcoin being an electronic version of cash, transactions on the BTC network aren’t anything like a cash transaction at all.

Firstly, they are extremely costly. And secondly, they aren’t guaranteed to be settled quickly. These are crucial elements of cash that the BTC camp has downplayed.

I personally hold a bare minimum BTC, only worth around £15. That £15 could cover the cost for our weekly bread and milk, except that no local store will accept it as a means of payment, and I can’t cash it out into GBP because the transaction fees to do so are too high. In other words, my pitiful BTC holdings are absolutely worthless to me.

The Cost of BTC Transactions

Data from blockchain.com shows the average fee per transaction (given as a seven day average) for the last year as being around the $2 mark, but also highlighting a peak of $55 per transaction in April 2021. Imagine wanting to use BTC as cash, let’s say to pay for a cup of coffee or even a weekly grocery shop at that rate. It's simply impractical and unviable based on the rollercoaster fees.

The Speed of BTC Transactions

If we consider the average time to confirm a transaction, a clear picture of a slow, unreliable network emerges.

While the average confirmation time for a BTC transaction is recorded at 14 minutes, a look into the historical data shows that this can be as long as up to 2.5 days when the network suffers congestion, neither of which is encouraging when it comes to the original vision of being an electronic form of cash. When settlements take as long, BTC simply can’t be used as a reliable payment method, especially between a merchant and customer.

The Cost and Speed of BSV Transactions

By contrast, according to bitinfocharts.com, BSV has an average transaction fee of a nominal $0.01, very often even less than a cent, and an average confirmation time of 10 minutes and 4 seconds.

I can hear the detractors jumping up and down now. “But BSV doesn’t offer instant settlement, either!”

However, because of the unlimited block size, any pending transactions are technically guaranteed to be cleared in the next block confirmation as BSV has the capacity to load unlimited transactions. This means it eliminates the BTC problem of a bottlenecked backlog!

This powerful combination of high-speed, low-cost transactions is what gives BSV its edge in terms of ultimate, unlimited utility.

If we consider the BTC network in its current form, it presents little in the way of utility. Supporters will wax lyrical about it being a store of value that shouldn’t be used as cash - mainly because it simply can’t - but if we think about the vision of the technology, it’s clear that Bitcoin was intended for far greater application.

Bitcoin SV, on the other hand, holds the capability to support unlimited transactions, and therefore, unlimited applications. 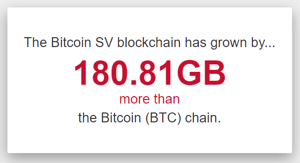 BSV aims to be not only the world’s money network, but the global public blockchain for enterprise - bCommerce - providing an ecosystem for business that's stable, scalable, security-focussed and regulatory-friendly.

More and more businesses are seeing the advantages of using blockchain technology within their frameworks and systems. We’re seeing innovation and applications coming from a breadth of industries - including, but not limited to, supply chain management, health, finance, social media and even online gaming.

BSV is the only blockchain technology that can provide a robust solution that doesn’t require constant consideration for potential protocol changes. This means that businesses can get on with - well - business, and not have to worry about development capacity and knowledge to upgrade the protocol as it’s set in stone.

Until there’s another blockchain that can offer all the above benefits to individuals, local businesses and global corporations, I’ll stand by my claim that BSV is the better blockchain.