Before we kick off, you may be wondering why such an article would feature on a Bitcoin Media House’s website. A key reason I founded Bitstocks was my disappointment in the traditional financial system and overall societal structures.

When I discovered Bitcoin, I saw the potential of the technology to resolve many of the deep-seated issues. I wanted to share that message far and wide, educate people on the technological and socio-political opportunities of Bitcoin, and highlight how it serves to disrupt the structures we’ve been indoctrinated to believe are the only way. Before one can see these opportunities in their full light, however, you need to understand the back story - what the issues are and why they exist in the first place. What follows below is the first part of that story. You may also want to watch The Awakening on the BitstocksTV YouTube Channel.)

One of the most widely acknowledged ‘conspiracy theories’ is the existence of a global powerhouse. A group of elites who dictate the structures of society and puppeteers of corporations, governments, military and citizens alike. They go by a few names; the Cabal, the Deep State, or the Shadow Government are most recognised. I refuse to call them the Illuminati, as that gives them the illusion of being in or of light, which they're most definitely not. (But that's a story for another day.)

In recent years extensive and more frequent disclosure of their methods has emerged from highly credible sources, with corroboration and confirmation backing up a plethora of allegations and accusations from collusion, corruption and cover-ups through to despicable crimes against humanity.

Despite this, few go on to extensively research and understand how dramatically and disturbingly deep their control filters.

In this article, I’d like to outline the framework, present the global pyramid of power, and highlight precisely how they maintain this status quo of domination. If we are to grow in universal consciousness, this is a fundamental building block of knowledge. To understand the manipulation at an individual level is to open your eyes to the global pandemic. To see how much of what you know and trust to be true and honest is, in fact, false and fabricated. To realise how our perspective is possibly shaped by overt indoctrination and deceit instead of purely by independent thought.

It’s an uncomfortable revelation, but one that must be faced if we are to stand in truth.

The Echelons of the Global Pyramid of Power

At the top of the pyramid, we find those who are bestowed the ‘divine right to rule’ by way of their bloodlines. Names such as the Rothschilds. The Rockefellers. The Morgans. The financial and industrial ‘kingpins of the world’.

They own and influence the highest levels of global money and commodities, superseding monarchs and governments alike. This is their stronghold and widespread mechanism to control modern civilisation, which brings us to the second tier of the pyramid.

Here we find the largest financial institutions of the world; the World Bank, the Bank of International Settlements, the Federal Reserve, Central Banks and the International Monetary Fund. All privately owned enterprises, with their primary shareholders being - yes, you guessed it - the powerful families. These are companies that derive profits, and massive ones at that, from the incumbent financial system, which conserves and encourages debt, interest and inflation.

Through seemingly infinite lending to governments for political spending, they dictate the supply of currency, which in turn impacts the value. As new currency is created from debt and isn’t backed by any commodity (not since the abolishment of the Gold Standard), the additional supply syphons its value from the existing circulation. This is called debasement, and what we experience as an inevitable erosion in our buying power, more commonly known as inflation. The grim reaper of financial theft; slow and deliberate. Also, entirely avoidable.

While on some level, most of us are at least somewhat aware that money is a controlled resource, few will consider that our sustenance - what we eat, what we drink - is in fact, limited too. When we head to the grocery store and see a sea of brands and a host of options available, we consider ourselves to have a wide selection - the freedom of choice.

But dig deeper, and you’ll discover that there’s a list of 10 mega companies sitting at the top of the food chain (if you’ll excuse the pun) and through their intertwined supply chains have a piece of the pie of just about everything we ‘choose’ to ingest. These are Associated British Foods, Danone, General Mills, Modelez, Nestle, Kelloggs, Unilever, Mars, Coca-Cola and Pepsico.

We can also easily consider a sub-layer here comprising big pharma. Considering the exorbitant amounts of money these corporations make from diseases, you’d be forgiven (encouraged even) to question why these are on the rise in the first place. Could the same companies providing us with our nutritionally-defunct, genetically-modified and pesticide-laden food be funding the pharmaceutical companies ready to sell medication to treat the illnesses that have developed as a result of our consumption habits? I’ll leave that for you to research and decide for yourself.

If power over our finances and nutrition isn’t enough to infuriate or at least unsettle you, what about the notion that there are societal structures in place intended to ‘shape’ our ideals, values and knowledge too? Government formations. Religious teachings. Education curricula. Media coverage. In general, our access to information; contained, suppressed and restrained to what they want us to know and believe, as opposed to the truth.

Mainstream media, in particular, is a clearly compromised industry. It’s a cleverly crafted distribution mechanism used to perpetuate a narrative that maintains the integrity of the upper echelons of the pyramid and keep the average citizen uninformed and unenlightened. 90% of Western media is owned by as few as 5 corporations who collectively control major movies, documentaries, television stations, news websites, magazines, publications and more. With such an extensive and entrenched network, think about how easy it is for them to sway the opinion of the people in one direction or another?

No prizes for guessing who makes up this bottom level of the global pyramid of power! It’s us. The general public. The ordinary citizens, who - as the name suggests - are nothing more than slaves to the system of debt.

Looking at this entire paradigm objectively (if that’s even possible?), it’s a masterful system. Each level of control has its role in ensuring that us ‘average Joe’s’ keep our heads down, subdued, distracted by the daily grind of bills to pay with dwindling wealth and providing the funds (via taxes) for our ‘protection’ from any potential threats to national or international security. The most sordid element of this? The money we spend our lives trying to acquire, is never really our own. It’s merely ‘on loan’ to us from the issuing bank, and can, at any point in time be restricted or entirely revoked.

I want to make something crystal clear here.

I don’t believe there’s any political, economic or societal structure without both good and bad actors.

What I’m against is the intentional manner in which malevolent forces have assembled, infiltrated and refined this hierarchical structure with ‘pockets of power’ for the primary goal of domination, driven by greed and greed alone. They’ve purposely created distortions in terms of our ability to gather and share knowledge, and how we’re able to value each other’s time (money).

And while this structure has been mostly unchallenged, we’ve had two advancements in technology in the last few decades that offer humankind a means to circumvent these distortions, diversions and distractions.

Two Ring System of Sovereignty: The Internet and Bitcoin

The Internet ushered in a new paradigm for information dissemination and communication. With it, we’re no longer required to outsource our sight, our understanding of what’s going on in the world, our culmination of knowledge. We’re no longer subject to misinformation and fabrications that serve an ulterior motive. Instead, we’re able to break through geographical, political and social barriers to gather first-hand reports and engage in peer-to-peer conversation to form an independent perspective on matters that concern us most.

Indeed, the advent of the Internet was one of the greatest steps forward to begin dismantling the Global Pyramid of Power, and for being able to see things as they really are. But the Internet wasn’t the entire solution. While unbiased information became more readily available, we were still constrained by the incumbent financial structures that remained cloaked in darkness.

Until Bitcoin, that is.

Bitcoin’s blockchain technology introduced a breakthrough in power dissemination. I demonstrate this best in my Tools of Humanity presentation (given at the CoinGeek Conference in 2018), where I use the below screenshot to highlight the difference in sight between fiat banking, Bitcoin and the anarchy-driven coins such as Monero and Zcash. 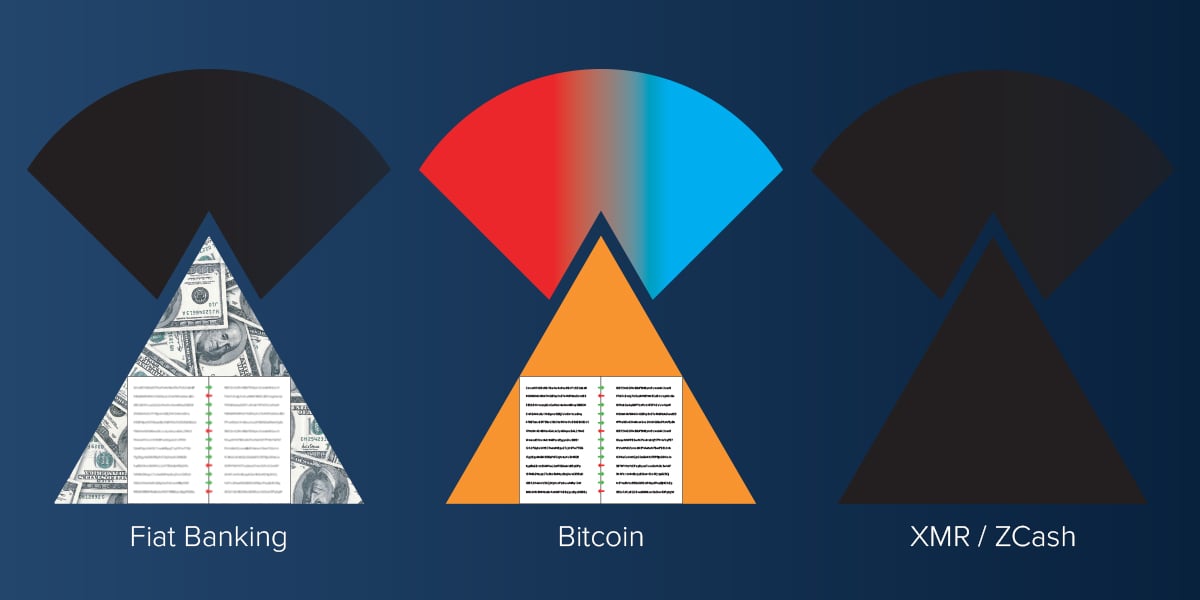 In the instance of fiat banking, we have access - or sight - of our own transactions, but not those of others. And while this is good for the privacy of individual accounts, the ledger of the financial institution itself is opaque. As a result, we aren’t able to determine for ourselves whether an activity or player is benevolent and malevolent in nature.

Bitcoin solves this. Bitcoin offers full sight as the original protocol provides an immutable, transparent public ledger of transactions and information. With this, we are able to clearly assess the polarity of entities in the space. It’s prudent to note at this point that while Bitcoin provides the technology for these self-assessments to take place, it doesn’t mean that it’ll magically eradicate negative forces in any particular space. But with the ability to see negative control and power taking place (e.g. 51% attack) we’re in a better position to filter out malignant players.

Warning: I can’t discuss the importance of sight without raising the issue of the absolute darkness coins such as Monero (XMR) and Zcash provide. Many in this space don’t realise the pure poison this offers. Essentially, what these coins are enabling is a means for financial anarchy, allowing nefarious parties to transact without audit or consequence. They take the already flawed traditional financial system and remove all friction to create an environment primed for those who wish to remain unknown and unseen, perpetuating a network for fiendish action. While some extol the benefits of an anonymous coin, its worthwhile to consider the societal repercussions and understand there’s a drastic difference between privacy and anonymity.

But back to Bitcoin, for now.

So, while this sight is a critical aspect of Bitcoin in disseminating power, another important element is the economic and financial sovereignty it offers.

Bitcoin provides stable money for citizens of the World. It eliminates the need for permission to economically interact - whether at the corner store or with a vendor 10,000 miles away. This financial freedom doesn’t automatically equate to instant wealth, but it does open the opportunity to all. With a limited supply and not created from debt, bitcoin doesn’t suffer the same issues of fiat currency. There’s no interest to pay. There’s no need for intermediaries. And there’s no authority able to sequester or seize your money. With bitcoin, what you have is what you own. Unequivocally and outright. The ultimate sovereignty and the biggest stepping stone to building a life from the fruit of your creativity and labour.